The Evolution of the Web

The evolutionary steps of the Internet reflect the evolution of our society as a whole. From top-down hierarchies that concentrate wealth, power, and status in a few hands, to a widely distributed, decentralized system that allows each individual not only to live, but to thrive and realize their full human potential. This graphic explains how we are currently transitioning from Web 2.0 to Web 3.0 and the impact this will have on our lives. 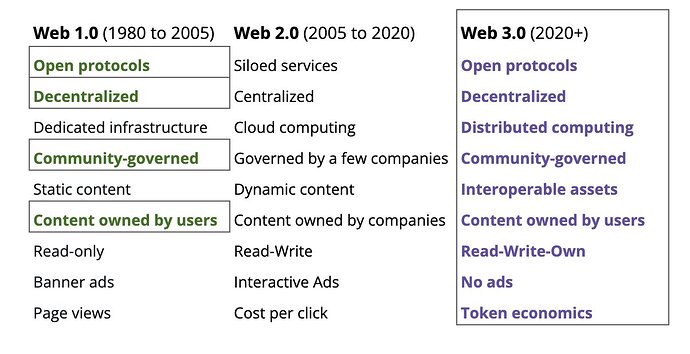 Computers and other technologies give me the freedom to focus on what I’m really good at, because they take away a lot of tasks that are boring and repetitive. The Internet also allows me to connect with smart and passionate people like you. I and many other people have benefited from your experience, ideas and guidance, which would not be possible without the advancement of technology.

Is there a shortage of smart and passionate people where you live? I doubt it unless you live in the middle of nowhere.

There is always a tradeoff for your time. If you are doing one thing, then you are not doing something else. So what would you be doing with your time if you were not conversing on the Internet?

At one time people called television “the idiot box”. Computers are worse than televisions. Phones are even worse than computers. People throw their lives away staring at those things. There is a whole world out there, and people are missing out on it.

Is there a shortage of smart and passionate people where you live? I doubt it unless you live in the middle of nowhere.

About 99% of the people around me don’t speak English, and even if they are smart and passionate, they wouldn’t be much help, as I am passionate about helping other people learn and improve their language skills.

There are certainly benefits to computers and the Internet. There are also negatives.You have to look at the net effect. Computers have become more than a tool. They’ve become a way of life, and for too many a substitute for life.

It’s too late at night for me to really get into this issue. I’ll just say for now that I’ve watched this evolve from the start. I’m a techie and even worked on the design of some of these things. I’ve also lived in remote areas where there was no Internet, no television of any type, and no radio reception - I suppose I could throw in that there were no police, no jobs, and a barter economy with little exchange of money.

I was a pretty serious outdoors type when I was young. I think it’s really sad that people can bring up a picture of any mountain in the world on their screen, yet they’ve never seen a mountain. They are so busy staring at their screens that they’re oblivious to anything else around them.

I don’t want this to sound totally one-sided. I definitely see both sides. I simply voice a side that’s less commonly heard. I absolutely do not think computers and the Internet are entirely beneficial.

Anyway, off to bed.