As you can see from this map, there are quite a few people in European countries who live paycheck to paycheck. In Germany, there are the most people across Europe who are dependent on state welfare, even though they work full time. What is the situation in your country? 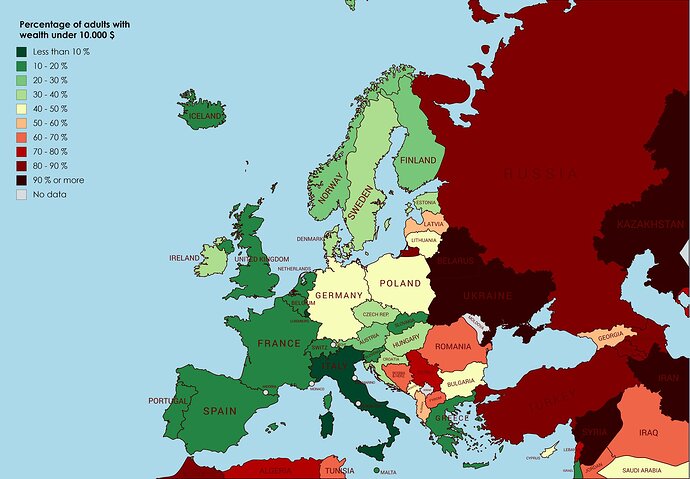 Here in the US, the increasing wealth disparity is a good sign. It shows that the average person is doing well. It can even show that people somewhat below average are doing well. It doesn’t directly say anything one way or the other about the lowest income people, but it can indirectly show they are doing well also - although it might get tricky to show why and how much that is true.

As for welfare, the word itself can mean a lot of things. In the US the term welfare is generally used for giveaway programs that people don’t pay into. Programs that are NOT considered to be welfare programs by most people are:

Unemployment and and “workers comp” are both easily and commonly abused, but they are not considered welfare programs by most people. The qualifications for unemployment are so absurd that it’s extremely common to use it as if it were a welfare program even though it’s not.

What most people call welfare are the giveaway programs. These programs are VERY seriously abused. The large majority of people collecting some type of welfare don’t need it.

Most welfare programs have a “needs test” which means the recipient’s income needs to be below a certain level ( assets are usually not a factor ). This would generally be based on the so-called poverty level. It somewhat depends on the cost of living where the people live, but in general the “poverty level” is very high. Someone living at the poverty level in the US is living in luxury compared to people in most of the world. They are even living in luxury compared to when I was younger, and even more luxurious compared to when my parents were young. I can EASILY live at about 60-70% of the poverty level and still have a good standard of living.

Hello, I come from Ukraine but live since 10 years in Germany and as I know there are about 13 Billion people who live in the poverty(1,2 billions lost his/her job, someone is already 30 years old but still without good basic education level, 7 billions of people in Germany are analphabetic).
And I know that Germany ist the social state who take care of his citizens, but the payments are so low that it is not enough for the simplest sings.
In Ukraine is the situation much worser, cause we have European prices but still ukrainian low incomes (about 100 € in month on avarage). The only happy thing that ukrainians have is private property. Although the state try to make this to our disadvantage through high taxes for energy, water and natural gas.