Describe Leipzig? … Crikey where does one begin?

Firstly I’m James Mulvenna (AKA Belfast Jamie) - I’m Irish not German so don’t be thinking I’m some kind of expert on Leipzig. - That said, sometimes a different perspective on things can be interesting.

Bit of History and Physical Geography

Leipzig (“The Hero City”) which brought down Napoleon & The Soviet Union.

Most people are unaware that Napoleon “Withdrew” from the “Battle of Leipzig”
(The largest battle in Europe until WW1) with catastrophic losses.
He was a spent force when Waterloo beckoned.
napolun.com/mirror/napoleoni … battle.htm

Likewise most people are unaware it was the weekly “Monday Marches” in Leipzig which led to the stand off with the Stasi who refused to open fire and cleared the way for the scenes on our TV’s a few weeks later at the Brandenburg Gate .
presseurop.eu/en/content/art … ll-leipzig and you soon begin to realize Leipzig is little bit special.
The First day I arrived in Leipzig I bought a postcard with an aerial view of the city and within a few hours of walking (Stadt-plan in hand)
I had pretty much got my head round it, well certainly round the centre.
Point being nearly every where you go in Leipzig is a Landmark to relate to and get your bearings making it easy to get to know.
Perhaps I can indulge with a few pics here…

One of the most amazing buildings is the former University tower.
Some say its a tooth shape others an open book - I don’t really care which. 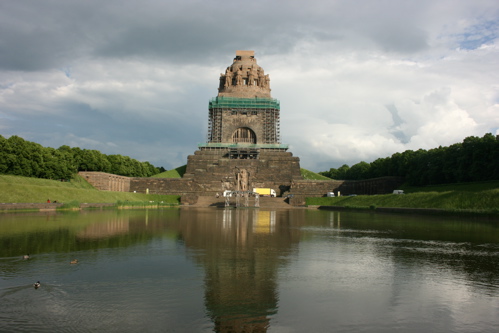 Good morning Jimmy, thanks for your very interesting post. My son tells me that in Limerick, where he lives, is suffering extremely low temperatures.

How are things in Belfast?

Kitos, ENGLISH, but living in Essen-Germany.

Absolutely Freezing Kd… wouldn’t be as cold as Germany though -
I can remember minus 30 in Berlin and Leipzig -
Im sure Essen has its fair share as well but Brits and Paddies
are never prepared for the cold weather… like the English are never prepared
hot weather - They just think its to good to be true.
youtube.com/watch?v=vdEnxNog56E
When are you visiting Leipzig kd?

Visiting Leipzig? ROFLMAO… I am skint! I can’t afford to visit Essen city.

Visiting Leipzig? ROFLMAO… I am skint! I can’t afford to visit Essen city.

Hehe!! Relax evous Kd! God love your cotton socks! - Maybe you could wait till the good weather and then get one of those Schönes Wochenende Tickets
toytowngermany.com/wiki/Schö … nde_Ticket
and you can travel to Leipzig very cheaply. If you wait till I’m there you could probably tag along and just let Torsten buy everything like he normally does…
He normally “forces” me to eat Steak in Escados till its coming out my ears and I have to be removed with the aid of an industrial winch.
The last time I went to Escados Torsten couldn’t make it and I didn’t realize someone was filming me…
youtube.com/watch?v=v29QfOyuZ3Y

Torsten - As someone “on the ground” in Leipzig -

Now that WAS funny Jim. Thanks.

Hey Jimmy, do you have any more pictures of Leipzig? The other ones were excellent.

There is an investigation into the exploding costs of the Leipzig tunnel. Initially, the investment was planned to be 572 while the project has already cost more than 900 million Euro. It’s said to be finished by the end of 2012. Maybe Mr Emmerich has a stake in it

As a matter of fact, if they are wise they just wait until 2012 comes around to see what really happens and if Emmerich’s predictions turn out to be true they can save a nice amount of money, stress and effort. What do you reckon?[YSaerTTEW443543]

Hey Jimmy, do you have any more pictures of Leipzig? The other ones were excellent.

Sure but I think Im in most of them?

Heres One at Napoleons monument

Heres me at the Hauptbahnof

Roofme.jpg1023×696
Heres my Green Card which looks a bit like Pablo Escobar!! hehe!!

Stewart Tunnicliff is an English language trainer, an educator and an entrepreneur. Today he is sharing some of his ideas with us.

You can contact Stew on our ESL forum english-test.net/forum/profi … ile&u=3747
Torsten:
Stewart, how long have you been living in Germany and why did you choose Leipzig as your work place? interview below
english-test.net/esl-cafe/32/index.html

The hometown of Johann Sebastian Bach

The Leipzig Fair is also known as the “mother of all trade fairs” and opened its new exhibition centre in 1996. In 1997 the trade fair celebrated the 500th anniversary of its endowment wth the “Imperial Right to Hold Trade Fairs”. The slogan of the Leipzig Fair: “trade fairs made-to-measure”.

St. Thomas’ Boys Choir emerged more than 800 years ago from the practice of music making during services at the former Augustinian Canons. Today, the choir enjoys an exceptional international renown.

The Gewandhaus Orchestra and the Leipzig Gewandhaus[/b]

Between 1765 and 1768, Johann Wolfgang Goethe studied in Leipzig. A scene from his celebrated “Faust”, “Auerbach’s Cellar in Leipzig”, made the restaurant world-famous.

Leipzig – the City of the Peaceful Revolution of 1989

Leipzig was the starting point for the events which led to the Peaceful Revolution of 1989. You can visit the original locations, e.g. St. Nicholas’ Church, where - after the Prayers for Peace every Monday - the demonstrations started along Augustusplatz and the central ring road to the headquarters of the secret police (Stasi). The former Stasi headquarters have been turned into the Museum in the “Round Corner”.

Leipzig’s Old City Hall is one of the most beautiful Renaissance town halls in Germany. It was built between 1556 and 1557 in just nine months.

This is the oldest surviving coffee house and restaurant in Europe which has been continuously in operation. Today it is a restaurant, cafe, and museum in one, documenting the history of the Saxons’ proverbial love of coffee.

Leipzig Central Station is one of the largest terminus train stations in Europe. A few years ago part of the station was turned into a state-of-the-art shopping mall and service centre.

Monument to the Battle of the Nations

This largest memorial complex in Europe, with a viewing platform 91 metres above ground, was erected to commemorate the Battle of the Nations of 1813.

Spinnerei – from cotton to culture

Formerly the largest cotton mill in continental Europe, Spinnerei is today the site with the highest density of galleries in Germany. The appeal of this old factory complex lies in its heterogeneous conversion: Beside 80 artists, 14 galleries and exhibition spaces, creative professionals like architects, designers, craftspeople, retailers and printers have found a home in the Spinnerei. A restaurant, theatre and dance groups, several cultural initiatives, small shops and individual loft apartments create a charming urban flair.

Like hardly any other city, Leipzig is home to a unique district of listed buildings from the Wilhelminian era. A major example of this particular style from the late 19th century can be experienced in the Waldstrassenviertel district.

Auenwald is a park and floodplain landscape unique in Europe, stretching in a green belt of ca. 1,800 hectares all the way through the city.

The ultimate experience for a night out, hopping from restaurant to restaurant, from pub to pub in the heart of Leipzig.
The name “Drallewatsch” is an old Saxon term for going out and having a great time.

Leipzig Zoo is one of the oldest zoos in the world and has one of the largest collections of species. It is therefore one of the most popular destinations in the city. Visit “Pongoland”, the world’s largest zoo facility for anthropoids, “Makasi Simba”, the lions’ savannah, a sloth-bears’ gorge, a Tiger’s taiga, an African savannah. And much much more.

Leipzig has its own amusement park in the south of the city. The park covers an area of 25 hectares including 60,000 square metres of water and a four kilometre trail which takes visitors on a journey through time.

An old gasometer houses the biggest panometer of the world. After the exhibitions “Mount Everest” and “Rome CCCXII”, artist Yadegar Asisi has realized another panorama in the Leipzig gasometer. The panorama “Amazonia - Yadegar Asisi’s magical picture of nature” takes you on a visual journey into the middle of the tropical rainforest scenery at the Amazon.

Oh my, Jamie,
I’m puzzled to what react first. Monty Python, unpredictable as ever, views of Leipzig , or yourself, witty and flamboyant. You do have smth of Salvador Dali, that’s for sure. Genes of Belfast? I imagine what’s it like to be in a company of the likes of you. How about visiting Euro 2012? Need direction?
Respect.

You do have smth of Salvador Dali, that’s for sure.