Can you help me rate my Ielts writing task 1 essay, really appreciate it!

The graph below gives information about car ownership in Britain from 1971 to 2007. 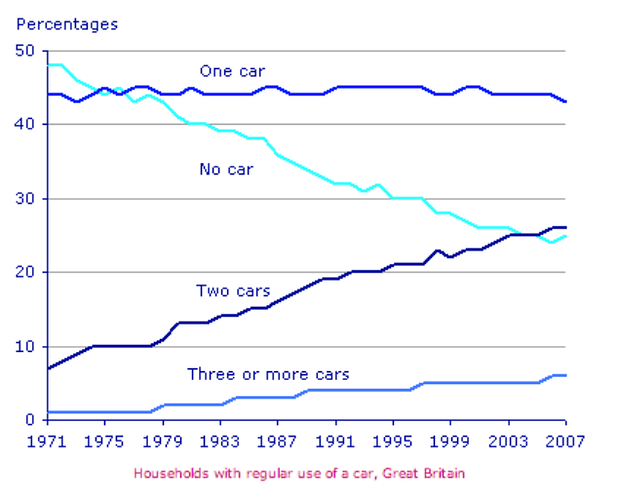 Capture638×513 36.7 KB
The line graph illustrates the percentage of Britain households that owned different numbers of cars between 1971 and 2007.

Overall, the most remarkable rise was seen in the proportion of family having two cars, while the reverse was true for no-car households. Meanwhile, there were only small changes in the figure for one and three-or-more-cars ownership.

In 1971, the majority of families in Britain possessed no car, at around 47%, which was closely followed by those having one car, accounting for 44%. In contrast, the percentage of two-car possession was much lower, at about 8%, and almost nobody bought three or more cars.

The period 1971-2007 witnessed a consistent fall to 25% in the figure for ‘no car’ compared to a ninefold increase in two-car households. Standing at roughly 43% in 2007, the proportion of British families with one car was 25% higher than the figure for owning three or more.

I think most of what you write makes sense but the real question is why you think you will be able to compete with an robot?

A robot wrote this entire article. Are you scared yet, human? | Artificial intelligence (AI) | English Vocabulary, Grammar and Idioms

The following article shows why exams and tests like TOEFL, TOEIC, IELTS, etc are no longer relevant.

I mean, why would anyone have you try to describe graphs and charts in English when an AI system can do the job much better, faster and at almost zero cost?

Good point, but IELTS writing, specifically describing graphs, is used to partly determine one’s proficiency in English. I’m just trying to be good at it so I can get a certificate to fulfill a criterion to study abroad. It might be better for robots to generate mass error-free analyses of charts, but for now, my writing skill is tested based on how well I can describe those.

I don’t like the hierarchical and archaic nature of organizations like IELTS which have contributed to promoting colonialism and exploitation. I won’t spend my time helping to artificially extend their lifespan because I’m convinced that micro credentialing is much more useful and effective. Here is one of the ten texts we have created on the subject: Micro Credentialing: Udemy | english.best