What do you make of this building?

What associations do you have with this photo? What do you think this building is? 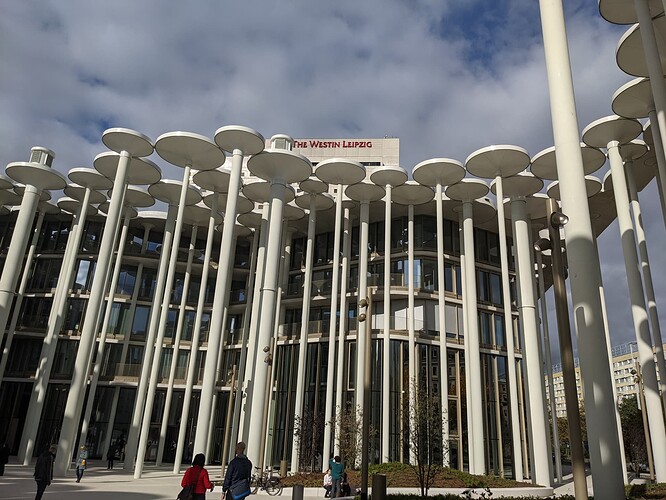 It looks very impressive. Is it the main headquarters of a bank?

It’s interesting and looks kinda cool. It seems like it would have been costly to build though.

Is that the Westin Hotel? Or does the hotel just show in the background?

What associations do I have? It reminds me of those video games where the character jumps from platform to platform.

I’m curious if that picture is facing north. It looks like it could be designed for passive heating and cooling. (similar to a large eave)

I also think it’s either a bank or a hotel

Is that the Westin Hotel? Or does the hotel just show in the background?

The Westin Hotel can only be seen in the background. The building is a bank, and a very special one at that, because it is financed by the European Social Fund and is supposed to serve the people, not the companies. Unfortunately, while the building is beautiful, it is also a huge waste of resources and shows that the EU is just as corrupt as many other institutions.

Since I’ve got nothing better to do I’ll ramble on about the building. I did some digging into this. It mostly just confused me, partly because I don’t know the agencies involved, and I don’t know some of the terminology that’s used.

So they are palm trees. (Stein Palmen). Now that I know what they are supposed to be, it doesn’t take much imagination to see palm trees and a tropical climate.

Since it’s not really tropical, I wonder if icicles will form and drop on peoples’ heads. That can be an issue with any building with an overhang, but these things have tremendously more area for icicles to form.

This is not a fancy eave for passive heating/cooling. These form a rectangle, and we only see one and a half sides out of four. Although this photo IS facing north as I thought before. So it does provide some passive heating and cooling, but that doesn’t explain the rest of it that we can’t see in this view.

Google Maps lists the trees as a tourist attraction, and is shown separately from the bank. (even though it’s obviously part of the bank complex) It’s surrounded by a number of other touristy locations - at least three museums, a large park and zoo, an arboretum, sports stadium, transportation, etc.

I noticed that each circle is touching at least two other circles. This would make it considerably cheaper and more stable. A stand-alone “tree” would have to be set deep in concrete to handle the stress. But since they support each other, they only need enough foundation to carry the weight, rather than the tremendous stress a stand-alone tree would have.

I see three of what looks like air vents. What the heck are those? They are on the pillar capital, not the building. Is there a basement, and there is air flow up through the “trunk” of the tree? Do they house some type of equipment? It’s a curious thing since they are on the capitals instead of the building.

Now as far as the politics, I don’t understand it. The (English) web site makes it seem like a regular bank, with the development fund barely mentioned. The German language site has more info, but still looks pretty limited. I didn’t get around to translating it. Wikipedia calls it a “subsidy” of the state of Saxony. I have no idea what that means, unless it means it’s state owned and/or run.

This made me realize that I don’t know how government buildings are approved and funded here in the US. I assume the various government agencies decide what, when and where to build new buildings, but that’s a guess. The US Congress allocates funds for all government agencies, but I’d be very surprised if they approve all of the thousands of federal buildings. On the other hand, I can’t see them giving agencies a free hand in deciding.

The government being government, I assume they have thousands of pages of regulations on building new buildings. One thing I’m pretty certain about is that they will not differentiate between “social service” buildings and any other building. It’s government, and therefore they will be wasteful regardless of the type of agency.

Anyway, I don’t see this SAB building being corruption. It just seems wasteful and irresponsible with taxpayers money. But then it’s government, so that’s to be expected.

It just seems wasteful and irresponsible with taxpayers money.

That’s my definition of “corruption” ;-).

That’s my definition of “corruption”

OK. Then using that definition virtually all governments are corrupt. But then the average person is wasteful with their money also. Most people spend money on all kinds of things they don’t need.

So what does “a subsidy of Saxony” mean? Does that mean it’s state owned?

So what does “a subsidy of Saxony” mean? Does that mean it’s state owned?

I would need to see more context to understand what the translation might mean, but yes, SAB Bank is basically owned by the state of Saxony.

That came from the Wikipedia article. In the history section it says:

If this is owned by the state, it goes back to what I was saying about the state not differentiating between a building for one agency vs another. It becomes a general question about how austere government buildings should be.

I have mixed feelings about this. I’m very minimalist when it comes to government. On the other hand, IF we are going to have government buildings, should they be aesthetic, and to what degree?

Near to the SAB building I see a museum of fine art, a Bach museum, a museum of natural history, parks, etc. I don’t know who owns the museum of fine arts, but very likely some of the art was subsidized by the government. I assume Bach was commissioned by some type of government. Are we better off without that art, or that music? Is commissioning Bach really so much different than aesthetically pleasing stone palms?

What about the church? The church is supposed to help people. How many people around the world were saddened when Notre Dame caught fire? Why should they be saddened by damage to a monument to the extravagance of the church built at the expense of the people the church should have been helping?

It’s a very grey area, especially for a minimalist like me. As much as it goes against my idealistic views, I’m glad those things exist. Is there a line that has been crossed, from reasonable aesthetics to blatantly showing off extravagance and wealth? To me, the SAB building is just showing off. It’s showing off wealth and power.

The other side of the building, which appears to be the main entrance, says it even more. The palm trees are there to look at. The main entrance is making a statement. It says that you are entering the halls of power.

Hi NN, you know, I wonder about it every day. Those people who donated so much money to restore Notre Dame, well, where were they when corona broke out? I know Notre Dame is a historical building, but Roman buildings, damaged throughout centuries, were never restored. I do believe in God, but you also have to be realistic. Don’t you think?

Dear Arinker, it was just a guess, because I never went and looked it up. However, I did notice that the hotel was in the background. Well, I just guessed.