Please give me feedback. Writing task 1

Hi everyone! I am waiting for your feedback. Let me know if I made a mistake. 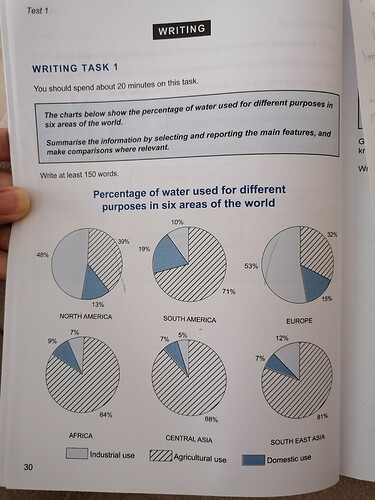 The pie charts illustrate the proportion of water used for various purposes in six regions of the world.

Overall, it can be clearly seen that water was used for agricultural purpose in all regions except for North America and Europe.

When it comes to North America, the percentage of water use in industrial areas nearly half, whereas the percentage of agricultural use was at 39% and that of three times than domestic use. For Europe, we can say that water used for industry made up the greatest part of its total water usage by just over half, while the proportion of agricultural use of water more doubled that of domestic use.

I would the plural form here: for agricultural purposes

Thank you. What about the rest of the text?

In Africa and Central Asia, water was used mostly in agricultural areas at 84% and 88%, while the percentage of the industrial use more by 2% than that of domestic use of water in the same areas.

I think in this sentence you need to insert ‘respectively’ after the two percentages and in the second part something is missing. Either you need a verb (increased by 2%) or you need a passive form (was used).

while the percentage of the industrial use more by 2% than that of domestic use of water in the same areas.

Thank you very much @Torsten I think I should insert “was” after the “industrial use”.