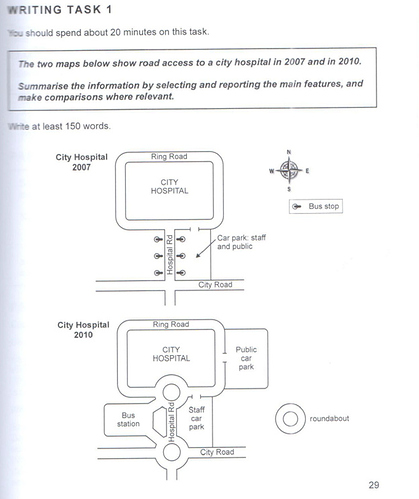 The maps give an information how to access to a city hospital have changed over the three years.

Overall, there were three different changes with regard to access of vehicle to the city hospital. A bus station, roundabouts, and car park were built as a new facitilies.

In 2010, the road leading to the hospital also changed. They built two roundabouts linked up to the Hospital Road and City Road and also the bus station on the east side.Furthermore, the Ring Road around the City Hospital was no modification comparing to the three prior years

Please review my answer above

The maps give an information how to access to a city hospital have changed over the three years.

Please note that the noun ‘information’ is uncountable so the combination ‘an information’ does not exist. Also, the verb ‘to access’ is not followed by the preposition ‘to’.