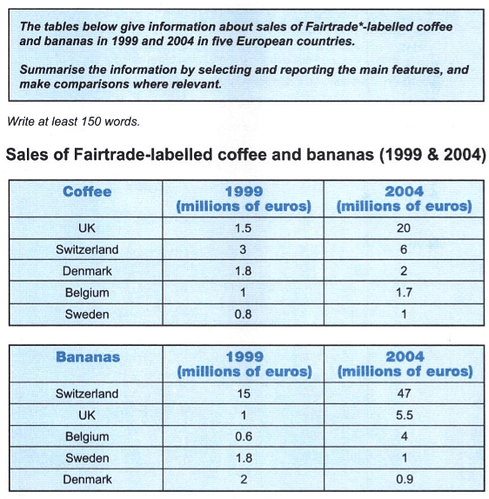 There are two different tables illustrating the revenues deriving from the sales of Fairtrade bananas and coffee in five European states in two distinct periods of time.

Regarding coffee, there is an increasing trend in all the five nations. In particular, the growth is large in the UK where Britons spent 1.5 million of euro in 1999 and 20 in 2004. Switzerland, instead, doubled up the sales of Fairtrade coffee from 3 to 6 million of euro.

Bananas, instead, do not present a similar trend. In fact, in two countries there is a decrease in the sales of these products while the other ones experienced the opposite trend. However, here too, Switzerland and the UK present a large increase. In absolute value, the growth is larger in the Alpine country rather than in the British ones, but in percentage points the increase in the UK overcomes the Swiss one.

Overall, the sales of Fairtrade coffee and bananas is increasing in the five countries, except for the Scandinavian ones where there is a decline in terms of sales of bananas.

Thank you in advance!

Hi Ale, welcome to our forum and many thanks for sharing your first post. I can understand what you write, most of your sentences make sense. The question is what exactly you are trying to accomplish with this exercise? What’s the point in analyzing what happened 20 years ago when countries like the UK and Germany have been plundering the resources of nations in the southern hemisphere while destroying the livelihoods of millions of people? There is no such thing as ‘fairtrade’.